How to Reduce Electrical Noise

What is Electrical Noise?

Electrical noise is a disruption in electricity that produces fluctuations in voltage or current and can be either electromagnetic induction or externally produced electromagnetic radiation.  Electromagnetic interference (EMI) is an undesirable noise, its pattern is frequently erratic, sporadic, and unpredictable.

EMI is the proper term for low-frequency noise, less than approximately 20 kHz, and RFI is the appropriate term for high-frequency electrical noise, greater than 20 kHz.

EMI is the interference generated by electromagnetic fields generated by one electrical or electronic equipment to another device.

What Effects Does Electrical Noise Have on Devices?

In general, the flow of electricity through the circuits in electronic equipment produces some quantity of electromagnetic radiation.  The energy generated by one device is either radiated into the air or linked to the cables of another device. As a result, the affected devices will fail to function properly. Electromagnetic interference is the energy from one device that interferes with the operation of another component or device.

When there is electrical noise, we always detect a sudden, but short rise in voltage or current by a small margin in most occurrences. The level of electric noise isn’t substantial it’s quite low, but it can easily damage your electrical devices if not addressed as early as possible.

Even though some noises are unavoidable, you can nevertheless safeguard your electrical installation against avoidable noises and lessen the unavoidable ones. 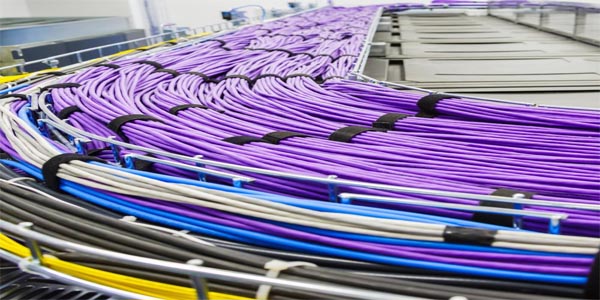 Routing the signal cable next to power sources or even an electrical cable is not a good practice, as it can disrupt the signals and induce electric noises. An electric motor or electric power cable produces a magnetic field which can increase voltages and higher voltages mean higher electric noise.

Twisted-pair cables just are two wires that have been twisted together to reduce emitted EMI (electromagnetic interference) and to diminish the effects of received EMI. Twisting the wires equalizes the effect of EMI on both cables and greatly reduces signal error caused by EMI.

Balanced signals generate EMI with opposing polarity, which cancels out the EMI to a great extent. This EMI-canceling effect is greater when the conductors are closer together.

A twisted-pair cable is useful even without shielding, however, a shielded cable will give additional EMI protection.

While jacketing may protect a cable from abrasion, moisture, and corrosion, it doesn’t protect against signal interference and electrical noise. Cable shielding may be needed to protect the cable from the effects of EMI from the environment and to prevent the cable from discharging EMI to its surroundings.

Electromagnetic shielding prevents or lowers the coupling of unwanted emitted electromagnetic radiation in systems and cables. Shielding is typically presented in the form of a metallic barrier placed in the path of electromagnetic waves between their source and the device to be protected.

Shielding is wrapped over the cable’s wire conductors to protect them by blocking signal interference and collecting up noise and conducting it to the ground.  It is important to note that poor system shielding can increase the EMI effect on the performance of a system.

Your main priority should be proper grounding. This will not only protect against electrical noise but also protects against power surges, which can potentially destroy your electrical equipment.  A drain wire should be connected to the ground on one side and make contact with the shielding on another end. This allows the noise to be routed straight to the ground through a drain wire rather than a signal wire.

When a system comes into inadvertent contact with a higher voltage source, such as lightning or a voltage surge, the voltage of the system may surge dramatically. Grounding, in such instances, provides an alternative way for the system to transfer the increased voltage to the ground, preventing any type of damage.

The most significant aspect is that electrical grounding protects electrical equipment and humans against voltage spikes in the electrical system.

EMI is something we all deal with daily, and it is expected to surge in the future due to the increasing number of wireless devices and standards, such as cell phones, GPS, Bluetooth, Wi-Fi, and near-field communication (NFC).

Now that you have a better understanding of what electrical noise is, we hope you will take the necessary precautions to reduce it.  It’s a naturally occurring phenomenon that continues to fascinate electrical experts, yet many people are unaware of it.

While certain types can be eliminated, while the majority of electrical noise is present and can only be minimized.

The important thing is to always apply a proper grounding technique, use twisted-pair cables with some type of shielding with added drain wire, and follow proper cable routing techniques and standards. This will help ensure that the electrical noise level is kept to a minimum for all your connected cabling systems and devices.

Please visit Syston Cable’s website to find the right cable for your applications.

Be the first to know about new products, promos, and events.