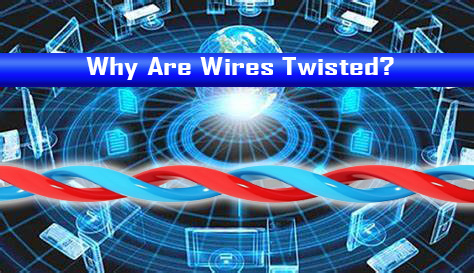 Twisted pair of electrical wires is a cabling technology used in many low voltage cables for applications such as audio, security, alarm, and network Ethernet cables.

Twisted wires have been used to reduce outgoing and incoming noise generated by electromagnetic interference.

Where Does Noise Come from?

A magnetic field is generated around a wire when an alternating electric current is passed through the wire. So, before we can understand how noise is rejected when a twisted pair wire is used, we must first understand where the noise comes from.

The reverse is also correct. When a magnetic field interacts with an electrical circuit, an electric current is generated within the circuit. This implies that a signal in one circuit can “transfer” to another adjacent circuit through a process known as induction.

This results in a common problem known as crosstalk, in which a signal from one circuit gets transferred to another through electromagnetism. The main purpose of twisting wires is to eliminate crosstalk. 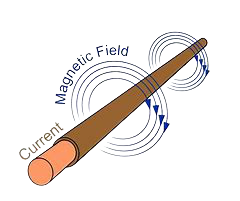 When untwisted wire pairs are exposed to a magnetic field, they form a circuit loop and encounter voltage induction. The circuits at the ends of the cable will be more susceptible to induced noise if the wire pairs are not twisted.

When the wires are twisted together, series of magnetic fields induce voltage with opposing polarity in adjacent half-twists. The overall result is lower induced voltage and better noise protection.

A circuit is made up of two wires, each carrying equal and opposite voltages. If one wire has a positive voltage, the other will have an equal but opposite negative voltage. The voltages on the two lines are the same, however, the polarity is reversed.

Two waves have the same frequency and amplitude but opposing polarities, one is positive and the other is negative. When they are combined together, they cancel each other out and produce zero voltage.

The two magnetic fields interact with one another and act against one another. This is known as disruptive interference.

Keep in mind that magnetic fields generated by other wires or equipment might introduce noise into a circuit. Positioning the wires of a circuit close together can also help to keep this from happening.

The signal flowing across the circuit is polarized in each wire. When the signal arrives at its destination, the machine that receives it expects to see opposing voltages on each wire.
Any magnetic field that interacts with the wires along the pathway from source to destination, on the other hand, yields the same voltage in each wire. When the receiving device detects a common voltage, it will reject transmission. This is known as common-mode rejection.

The wires do not hold the same position when they are just next to one another. As a result, a nearby circuit would always be closer to one wire than to the other. Therefore, a passing magnetic field will almost always interact with one wire before reacting with the other.  When opposing signals are not exactly aligned, some cancelation occurs, but still not total cancellation. The two wires should preferably be in the same exact place so that any surrounding circuits or noise sources are the same distance away from each wire.

Twisting wires is an excellent balance that allows a cable to carry multiple channels while maintaining the wires in close proximity and eliminating a significant amount of noise.
Twisted wires may not be in the same position, but the two wires alternate down the length of the cable. As a result, each wire has the same average position.

A surrounding circuit or nearby noise source may be closer to one wire at some locations, yet closer to the other at other points. It is certainly effective, although it may not be a perfect process.
Wire pairs are frequently routed near a conducting surface, also known as a ground plane. When the wires are twisted, the wires will be the same distance from the ground plane when averaged over their length. Their common-mode impedance will be balanced, and the circuit will have lower emitted radiations and greater resistance to noise pickup.

Twisting has the added benefit of automatically pulling the wires tightly together while maintaining their separation at a uniform distance and provide twice the thickness of the wire insulation.

Why All Wires Are Not Twisted?

Untwisted wires may be a reasonable solution in electromagnetic situations where the benefits of twisted cables are not required.

Untwisted wires are inexpensive, take up less space, and are shorter than twisted wires. However, in most cases, twisting gives significant benefits for a minimal increase in cost.

All Syston’s Cable Products are designed with twisted wire cable to reduce crosstalk due and maintain optimum signal transmission.

Be the first to know about new products, promos, and events.